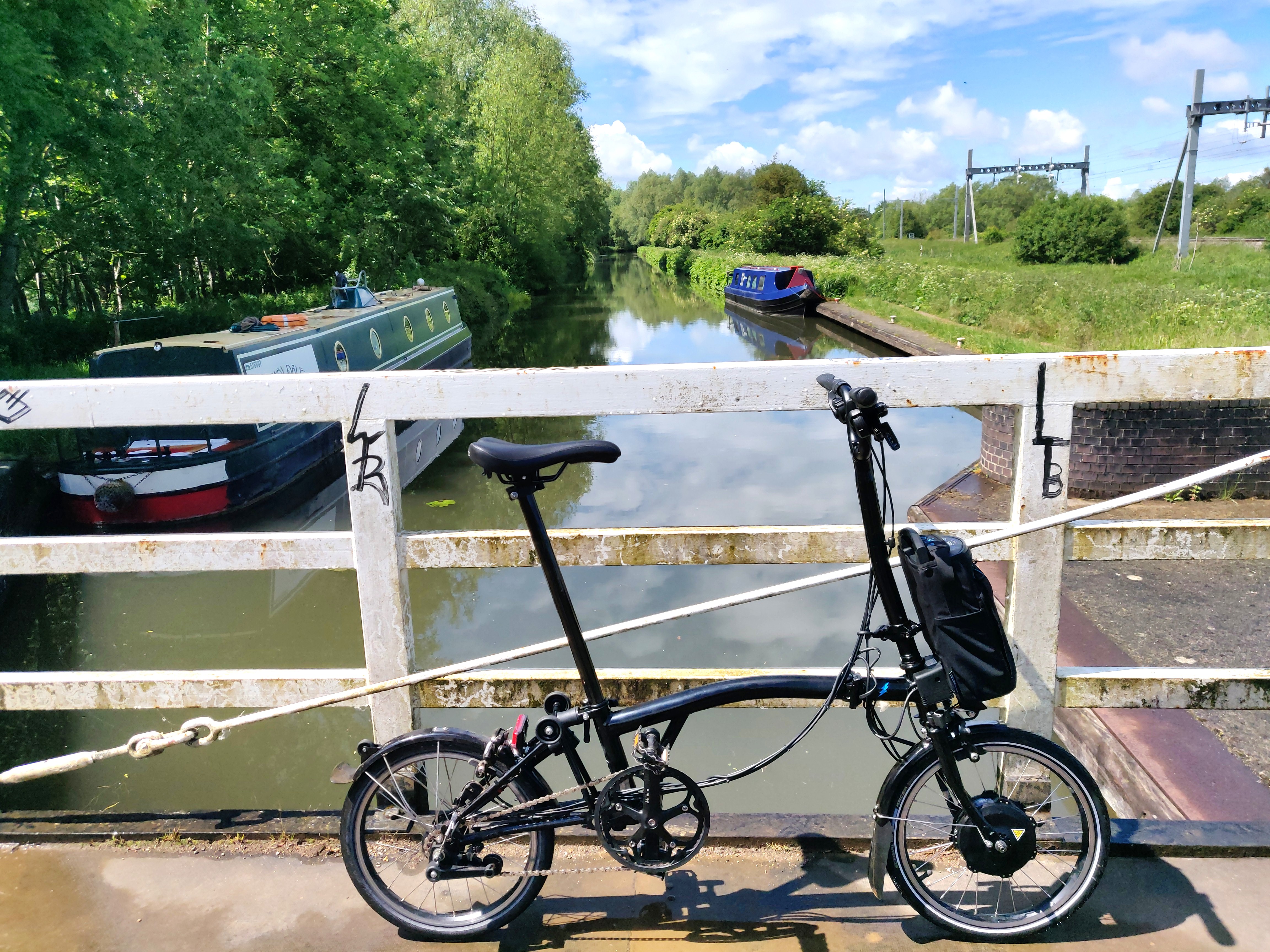 I've been pondering an electric bike for a long time now and, since I appear to be attending meetings in London far more frequenting than, well, ever before, when a Brompton Electric which looked like it needed a little TLC came up on eBay, I put in a bid.

And, much to my own surprise, I won. (Surprise because I got it for about 50% of retail, which is very good, even for one which needed a little love.)

Fortunately, my assessment of the bike was pretty much spot on. There was nothing majorly wrong with it, and it just needed some basic maintenance: a new chain and tensioner wheels, a tweak to the mudguards to stop the stays from rubbing against the wheels, more air in the tyres, and an adjustment to the brakes.

It also needed the official Brompton "upgrades" doing: a change to the stay on the front mud guard, and the clip on the battery. The team at Evans Cycles in Reading was superb when it came to doing this, and giving the bike a once-over. Why these were not done by the previous owner, I don't know. (Thanks Steve for the heads-up on these.)

Last, I did the bits which I did on my non-electric Brompton which I'd found to be of most benefit: EZ springs in the clamps, and replacement handlebar grips, because the default Brompton ones are incredibly uncomfortable.

I haven't bothered putting on a rack, at least not yet. It makes moving the bike around when folded a little easier but, in the time I've had a rack on my non-electric Brompton, I've not used it for carrying anything. Not once. And I don't tend to roll the bike in the folded position much.

It has a few dings, which are too deep to polish out, so I might end up filling those.

The power of the electric motor is great. Even on the middle setting, it makes hills effortless, and general cruising a pleasure.

I had a meeting today and my car refused to start. It was only 8 miles, so I jumped on the bike. It wasn't the speediest of trips - I went along the towpath, and it was a touch muddy and slippery after the rain, and I didn't want to end up in the canal - but it was a darn sight faster on this bike than on my normal Brompton. And, not only did I arrive pretty quickly, I was not out of breath or sweating.

I like the H handlebars. My non-electric Brompton has the much lower S bars and, while they've grown on me, I think I made a bad decision. The H bars, and the more upright riding position, are simply more comfortable for me.

I also like the integrated lighting. It means I can have lights on all the time and not really need to think about it.

To change the motor's power setting, you need to press a button on the battery unit. It would be ideal if it was a switch on the handlebars, as I suspect I'd like to switch between the lowest and middle settings. It can be done using the app (below), but I don't want to have my phone on the handlebars the whole time and, if I did, I probably wouldn't have it on the Brompton app.

There is an app, but it doesn't appear that anyone has reversed engineered the protocol or replicated the functionality with a Free software implementation. I've yet to try the app, so I'm not sure if the absence of this really matters, but I'd rather not rely on an "official" app all the same.

There is a dearth of bags suitable for the Brompton Electric. The bike came with the small bag, which basically just holds the battery. I bought the larger, 20 litre, City bag, and it's, well, passable. My 15" laptop only just fits in - just, and it's a real squeeze - and there's no chance I'll squeeze in my portable monitor. It lacks the myriad small pockets of the bag I have for non-electric Brompton. I'm not convinced how waterproof it is, but at least it has an integrated cover. For £130 (ouch), it's a disappointment, but still the only choice available.