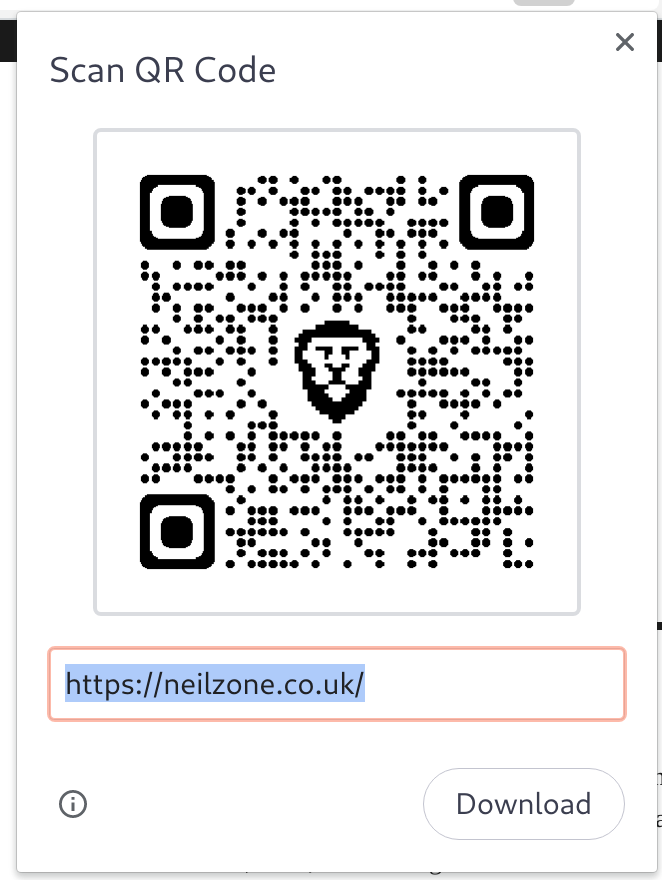 Although I only intended to use Brave to make Microsoft Teams work well on Debian Linux (and I do still use it for that), I've started to use Brave more broadly, and I'm increasingly impressed.

In some ways, that is a shame, because it means that the browser I have used for so many years, Firefox, is increasingly less useful to me. I know it's weird to have a "favourite" bit of software, but I rather like Firefox.

I'll post about comparative JavaScript performance some other time, as this is just about one specific feature of Brave that I rather like: the ability to share a page's URL via a QR code, with two clicks.

It's so simple: right-click on the page, and select "Create QR code for this page". And up it pops.

It's a direct QR code, encoding the URL of the page itself, not a link shortener, pushing traffic to Brave's servers.

Yes, there might be more advanced ways of sharing a URL from your computer to your mobile device - I'd probably send it to myself via matrix - but this is quick, simple, and lets you share a URL with anyone who can see your screen and who has a QR code scanner on their mobile device.

(I presume it also works if you are sharing your screen on a video call.)