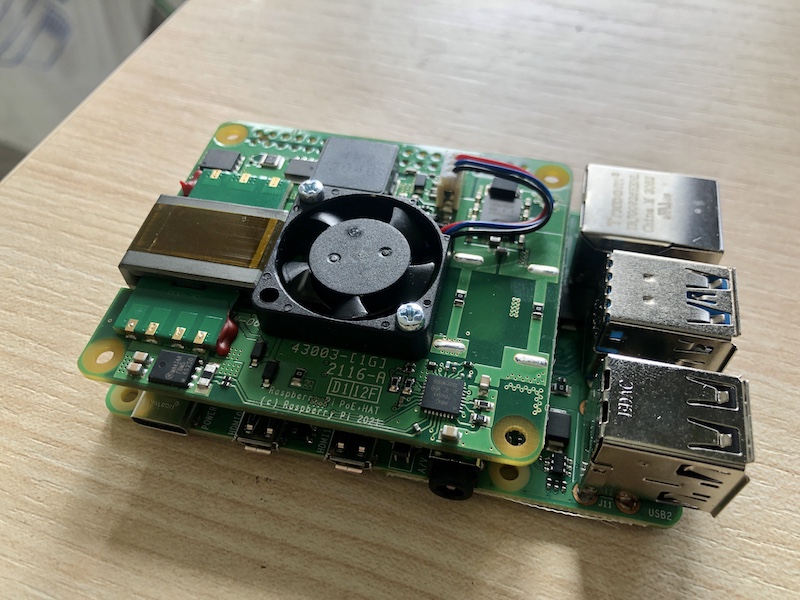 I got LUKS running, with ssh unlocking, for better protection of data at rest but with the convenience of not needing an IP KVM or being physically in front of the machine to boot it.

The downside? I had not realised that the latest batch of PoE HATs I had bought were the new PoE+ HATS (I didn't realise these existed).

And I had missed the small print on The Pi Hut's website, which says:

Now, I could be grumpy and suggest that putting this kind of information under the "View more" button, meaning it is not visible by default, is unhelpful but, ultimately, it's my fault.

I wanted the fan working more than I wanted Debian 11, so I was prepared to compromise on Raspberry Pi OS (formerly Raspbian).

But I still wanted LUKS. And I also wanted a 64 bit OS, and the normal Raspberry Pi OS images are only 32 bit, seemingly for legacy reasons.

And there is a way through this, if you are willing to run an official but beta 64 bit version of Raspberry Pi OS.

Download the official-but-beta Raspberry Pi 64 bit beta image. I went for the "lite" image, which does not include a desktop environment.

Put the flashed SD card into your Pi. Do not plug in a USB key at this point.

Power on the Pi.

If you are using the PoE+ HAT, the fan will not power on at this point.

It will resize the root filesystem, then reboot automatically.

When you can log in, do so using the normal default credentials of username pi and password raspberry (which you will want to change; either using passwd or via the raspi-config utility).

You cannot log in using ssh at this point.

Do a full OS update:

Check if there is an update available for the Raspberry Pi's firmware:

If there is, apply it:

Reboot (which will also apply the ROM update, if there is one):

When it has rebooted, the fan should now be running. Hallelujah.

I tried a number of ways of doing this, and the one I found most reliable was this set of scripts.

Warning: this entails running scripts from Github. I mean, nearly all of Github use involves running code from Github, so this is hardly uncommon, but I flag it all the same. I read them through, and was content that they were doing what they were supposed to be doing, but YMMV.

When you get to the end of the script, you should have a working Raspberry Pi 4, with PoE+ HAT fan running (after you have logged in), with LUKS. Whoop!

I want to be able to decrypt the LUKS partition and so reboot the machine, remotely. The guide I wrote for vanilla Debian did not work on the Raspberry Pi, but this did:

Note: this will cause the ssh server to listen on port 2222. This is, IMHO, an improvement over my original guide, as it makes life easier in terms of managing known_hosts.

You will see this as part of the installation:

You do this by editing /etc/initramfs-tools/initramfs.conf and appending your chosen settings.

I wanted dhcp, for convenience:

If you wanted a static IP, it would be something like:

Add your public key to /etc/dropbear-initramfs/authorized_keys:

Either edit the file by hand, or else:

Note: I'm assuming that you already have a private/public key pair set up for ssh'ing into this box. If not, follow my previous guide for that bit.

When your Raspberry Pi reboots, you should be able to connect to it over ssh: