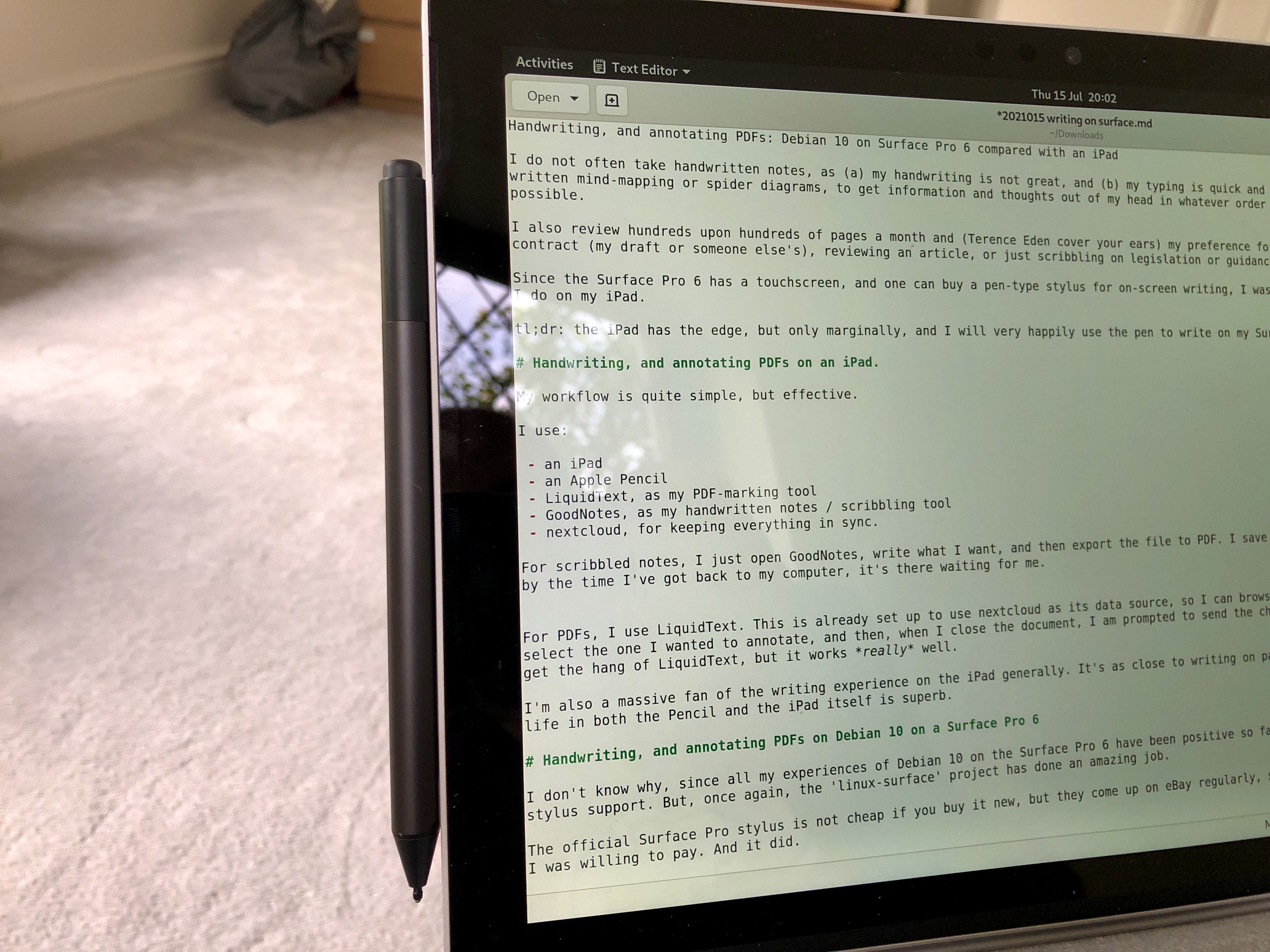 I do not often take handwritten notes, as (a) my handwriting is not great, and (b) my typing is quick and accurate. But I do sometimes like to do hand-written mind-mapping or spider diagrams, to get information and thoughts out of my head in whatever order they appear, and to do so as quickly as possible.

I also review hundreds upon hundreds of pages a month and (Terence Eden, cover your ears) my preference for this is PDF. Whether it's marking up a contract (my draft or someone else's), reviewing an article, or just scribbling on legislation or guidance, I find it an effective way of working.

Since the Surface Pro 6 has a touchscreen, and one can buy a pen-type stylus for on-screen writing, I was keen to give it a go, and compare it to what I do on my iPad.

The iPad feels more like writing on paper, but the Surface Pro 6 has a reversible stylus, with the other end acting as an eraser. Both work perfectly well for handwritten notes / spider diagrams, and for marking up PDFs. I was not sure what Linux support would be like for the styles, and I am very pleasantly impressed, and I will very happily use the pen to write on my Surface Pro 6.

Handwriting, and annotating PDFs on an iPad

My workflow is quite simple.

For scribbled notes, I just open GoodNotes, write what I want, and then export the file to PDF. I save it into one of my nextcloud-sync folders, and, by the time I've got back to my computer, it's there waiting for me.

For PDFs, I use LiquidText. This is already set up to use nextcloud as its data source, so I can browse the files stored in my nextcloud instance, select the one I wanted to annotate, and then, when I close the document, I am prompted to send the changes back to nextcloud. It took me a while to get the hang of LiquidText, but it works really well.

I'm also a massive fan of the writing experience on the iPad generally. It's as close to writing on paper as I've found on any system, and the battery life in both the Pencil and the iPad itself is superb.

Handwriting, and annotating PDFs on Debian 10 on a Surface Pro 6 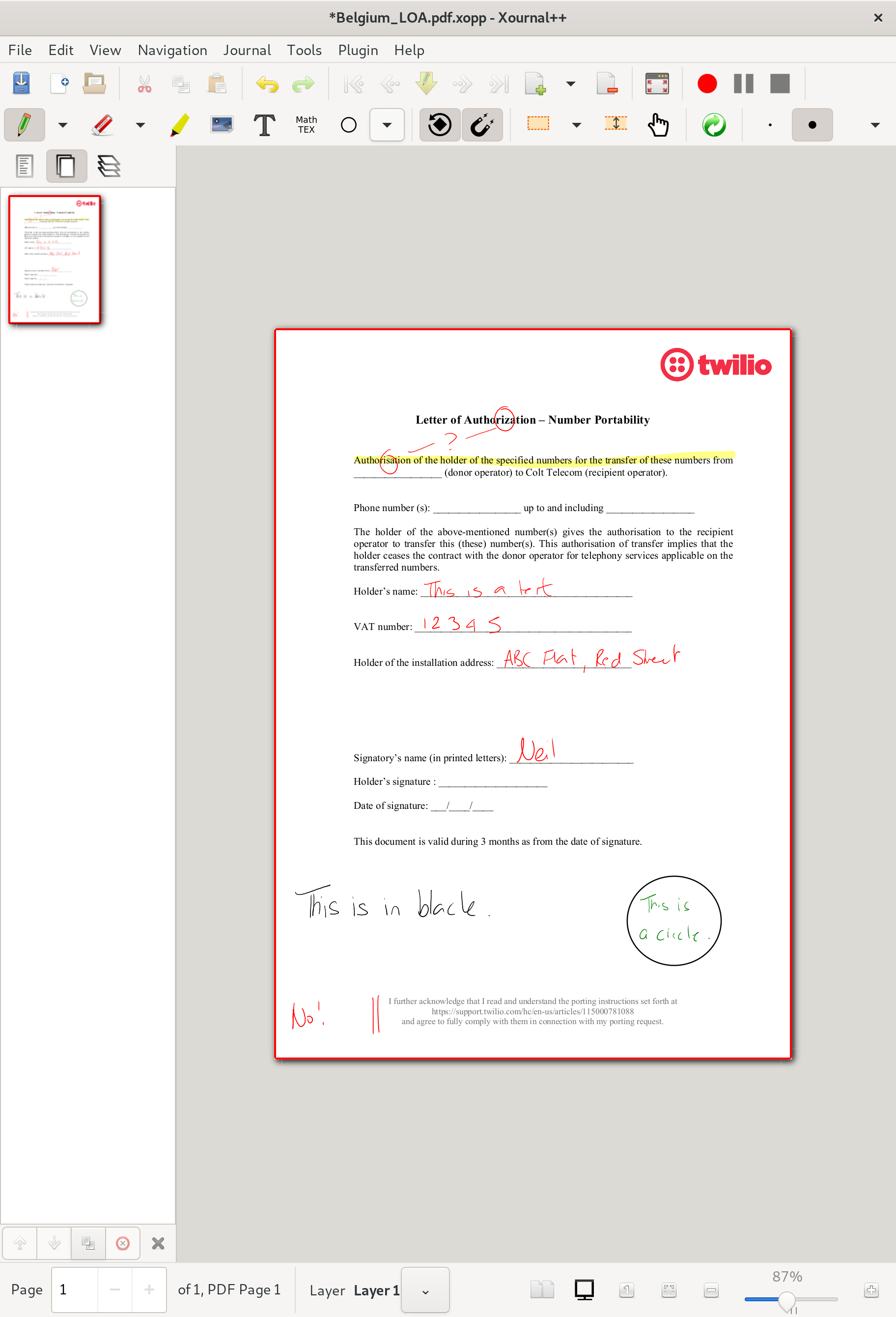 I don't know why, since all my experiences of Debian 10 on the Surface Pro 6 have been positive so far, but I was not expecting much when it came to stylus support. But, once again, the 'linux-surface' project has done an amazing job.

The official Surface Pro stylus is not cheap if you buy it new, but they come up on eBay regularly, so it was just a case of one coming up at a price I was willing to pay. And it did.

I've been experimenting with xournal++ (GitHub) as the software for both handwritten notes and editing PDFs.

I had hoped I could install it through apt, but that was not to be. There is a PPA available, for Ubuntu, but I didn't find a way to make that work for Debian 10 in my cursory search. Instead, I installed the latest release as a .deb file:

This is not ideal, as I won't get automatic updates, but it's the best I've been able to do so far. 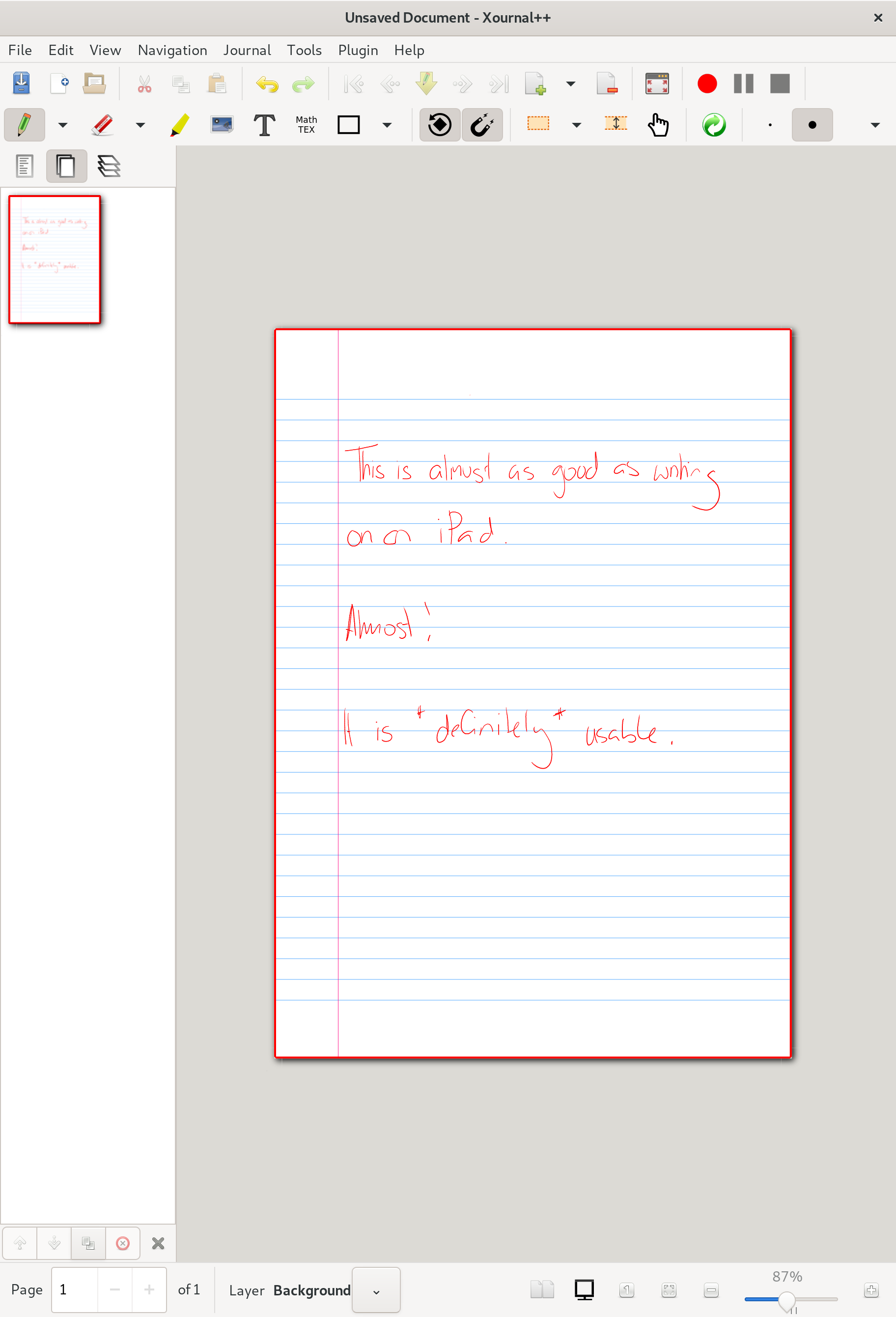 By default, it opens up to a notebook page, but it's easy to open a PDF and scribble on that instead. It doesn't have most of the features of LiquidText when it comes to extracting text, but I rarely use those features, so I'm not sure I'll miss them.

Because I am opening up files from the file system, I don't need to think about the nextcloud side of things (although, of course, it is there), since that works automatically in the background.

It works really well, and I was very impressed by the on-screen writing experience. It's not quite as close to the "writing on paper" feeling that I get with the iPad, but it's absolutely usable, which is the key test for me. I can definitely see myself using this, especially since I'll have the Surface Pro with me, and the best tool is usually the tool which you have to hand.

One thing which the Surface Pro style supports which the Apple Pencil does not (at least, my Apple Pencil does not; I have one of the earlier generations, not the latest ones) is that you turn over the Surface Pro stylus and use the other end as an eraser. I could, of course, just select the eraser tool from the interface and use the "writing" end, but this makes it that bit more seamless.

It's also magnetic, and sticks firmly to the side of the device. It does not a clip, for securing it in a bag, but, well, I have a 3D printer, so it will have a clip soon...

For £25 delivered, I am not complaining. Had I paid full price, I might be a little fussier about this.

I'm impressed with how much of this "just works"

For all the jokes about "The Year of the Linux Desktop", I've been impressed with just how usable I find Debian 10 on the Surface Pro 6. Everything I have tried so far, with the exception of the camera (still working on that), has "just worked". Including, I'm pleased to say, using a style to write on the screen.