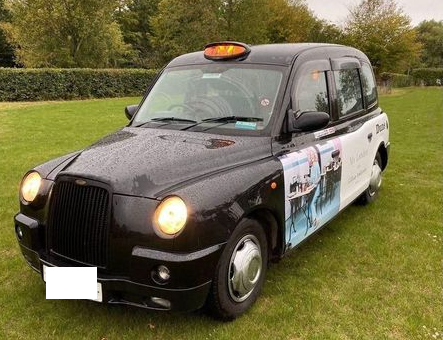 Yes! I bought a taxi online, as a personal car.

Well, not strictly a taxi. A car which used to be a taxi. Now it's just a car.

But it is the iconic London Taxis International TX4. For ease, I'm going to refer to it as a taxi...

Why did you buy a taxi online as a personal car?

In short, it's because I wanted one.

And I wanted to see if I could buy a taxi online. After all, I buy nearly everything else online.

They're not particularly expensive vehicles as "fun" cars — around £1,000ish — and you don't see many of them where I live, so it has some novelty value. I don't actually drive that much, so having an additional car, especially a diesel with a massive vehicle excise duty bill is a definite luxury, but it seemed like a bit of fun to potter about in.

It also means that, if I got for a bike ride, it doesn't matter how muddy it gets: I can chuck it in the passenger compartment, and hose that down when I get back.

No, in the sense that a TX4 in decent condition gets snapped up very quickly, so you need to move rapidly if you spot one you want. I saw a good example posted on Facebook Marketplace at gone 20:00 one evening, and asked about it about 05:30 the next morning. Within those night time hours, it had already gone.

Also no in the sense that I wanted a TX4 (not a TX2), and there were no TX4s within a visitable distance of me.

Yes, in the sense that I managed to do it...

Finding a taxi online without seeing it in person

I quickly gave up on the idea of being able to find a taxi near me which I could view, and that almost put an end to my plans.

Then I realised that I could pay someone to bring the taxi to me and, while that obviously increased the cost, it made buying a taxi without seeing it in person a realistic option. It also meant that, within reason, the distance of the vehicle from me was less relevant.

So I embarked on a bit of gambling exercise: buying a taxi, which is almost inevitably a high mileage vehicle which has had a hard life, online without seeing it, and not getting one which needed a lot of money going into it.

In an attempt to find a vehicle in good condition for a reasonable price, I immediately discounted any vehicles which were described as having a fault, or which did not have a valid MoT certificate.

To check MoT history, I used the government portal and the vehicle's registration. I found the MoT history checker more useful than just checking the MoT status. If the advisories looked more hassle than they were worth, I passed on that vehicle too.

Checking if it was on insurance companies' databases

Unlike more common vehicles, you can't use CompareTheMarket or similar aggregator / price comparison sites to buy insurance for taxis for personal use.

So, chancing my arm, I popped the registration number of one of the taxis I was considering into Churchill's website. And Churchill recognised it.

Curiously, that's not the case for all LTI TX4 vehicles. Some were in Churchill's database, and some were not.

For ease — because I didn't want hassle insuring it — that became another of my standard checks, and I discounted any vehicle which was not in Churchill's database.

I also looked at the photographs available, and if major portions of the vehicle were not visible, I assumed the worst and passed on them.

The gamble of buying it

I found a vehicle I wanted in Ipswich, and it met my criteria. I decided to take the risk, and buy it sight unseen.

There were two risky bits to this activity:

The taxi I wanted was being sold through a private advert on AutoTrader. And, being a private seller, it meant that the protection offered to me by consumer law is basically non-existent. Sure, in theory, I'd have a claim for breach of contract, but that would be a hassle and, if it truly was a scam, the chances of a claim working out were probably low.

So I saw this as a gamble, gambling on the fact that, hopefully, most people are honest, and that, if I wanted to pull a vehicle scam and try to sell a vehicle which didn't actually exist, I probably wouldn't use an LTI TX4 as the vehicle of choice.

In the end, after chatting with the then-current owner and getting reassurance that there was nothing materially wrong with it (in their view), I just transferred the money to his bank account.

It was a £1,100 gamble. I would have been mightily annoyed to lose that money, but I was also prepared to risk it in the hope of acquiring a taxi as a personal car.

Getting the taxi to me

At the point I realised that it's actually dead easy to get vehicles shipped around the country, buying a taxi become a lot easier. I didn't need to find someone willing to deliver the taxi they were selling, but just someone willing to part with their taxi to someone with a transporter vehicle.

I used AnyVans. It was remarkably easy. I told them what vehicle it was (I had to do this manually, as the registration plate was not in its database), where it was, and where I wanted it. It gave me options for delivering it, the cheapest of which was about four days away, and around £200. Not cheap, but a heck of lot easier (and a better use of my time) than me getting to Ipswich to pick it up.

Although I'd seen photos of a taxi, and I'd had a chat with the then-current owner, who seemed very genuine and helpful, part of me wondered where there was actually a taxi there to collect.

The AnyVans system was useless in terms of proactive notifications, but it does have a live map of the driver, so I could see their progress from their start point to Ipswich. In fact, I could see it in so much detail that I could see at which fast food outlet they stopped for lunch. But anyway. For me, the critical moment was when they got to Ipswitch: was I going to get a call to say that there was no taxi?

No. No call. Instead, the status updated to "collected" (or something like that), and slowly the transporter made its way down to the M25 and along to Newbury. 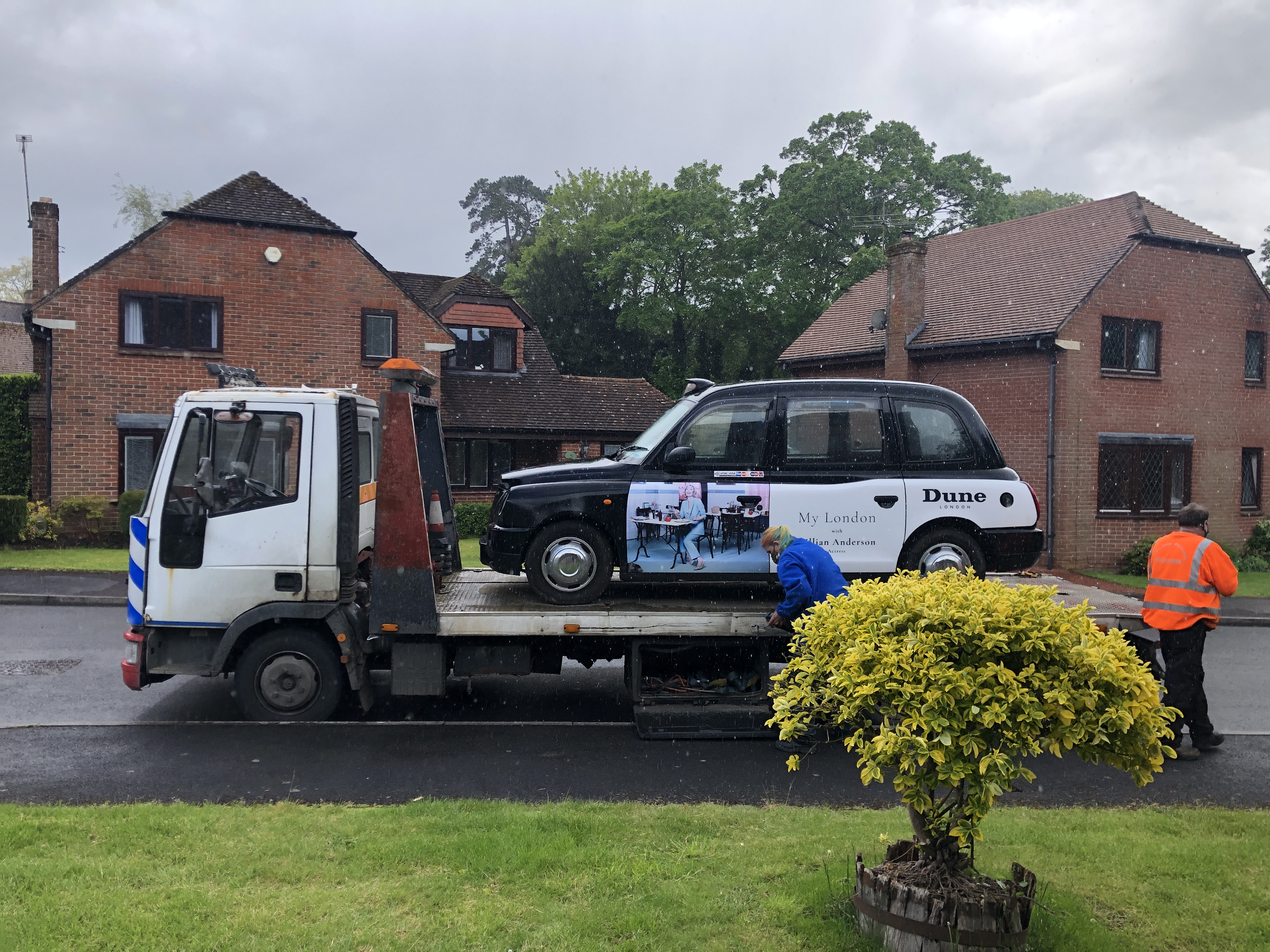 It arrived in the middle of the afternoon, and I was delighted to see that the driver was able to drive it off the vehicle and onto the driveway.

So, from that point on, I was the proud owner of a London Taxis International TX4, as a personal car.

I was almost unreasonably excited about going for my first drive in it.

... but there's always a "but": the engine management light

And there was a "but". Sure, it had arrived but, as he handed me the keys, the driver said "oh, you do know the engine management light is on?".

No, I didn't know that. If I had known that, I would have passed on the vehicle, as that could mean anything from an insignificant sensor issue to something more serious (and thus costly).

I messaged the seller, and asked if they'd known about it. Apparently, today was the first time it had appeared, and so they hadn't done any attempted diagnosis.

"Oh well", I thought. I was planning on getting it serviced at my usual local garage anyway, and so this was something else to add to the list.

Using the taxi's OBD 2 socket, I extracted the error code, and it was not one I was hoping to see: transmission error.

I had — still have, as the garage has not got round to looking at it yet — got my fingers crossed that it's something trivial.

Have I bought a lemon? Did my gamble pay off? I'll have to wait and see.