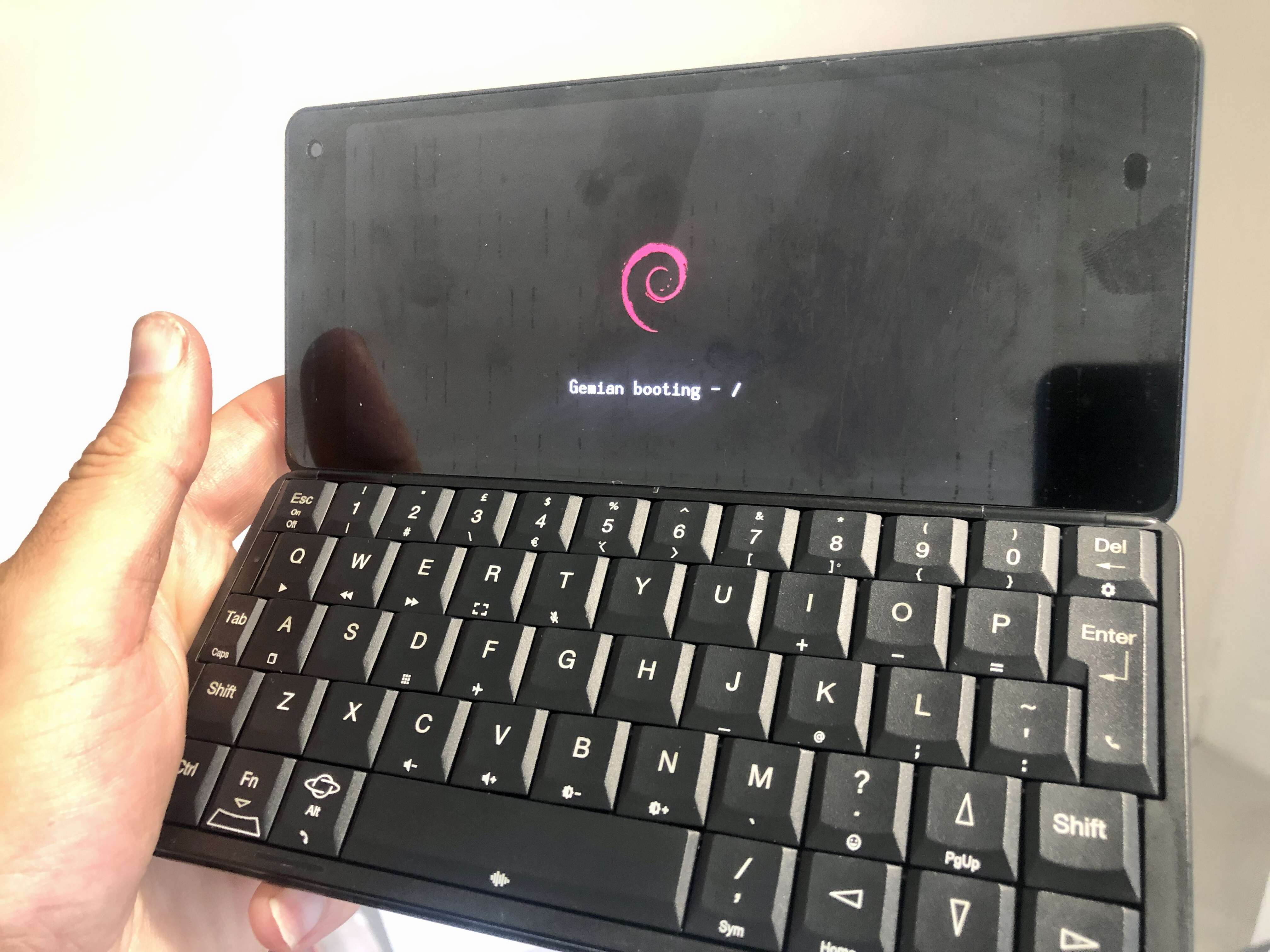 I have been hankering after a properly portable computer for a while. I honestly don't know why, as it is not as if I am travelling much at the moment, but there we go. As a bit of a project, perhaps.

I knew roughly what I wanted, but not exactly what make or model. I wanted something with a <10"screen, a physical keyboard, and the ability to run Linux in an acceptable fashion. That last bit is somewhat arbitrary, but ultimately I want something I will enjoy using, and that I can use to get work done. I want a fun tool, not just a toy.

I also did not want to spend a fortune.

Two options arrived pretty quickly: a GPD Pocket 2 going for a good price on eBay, and a friend getting in touch to say that they were willing to part with their Gemini PDA. I bought both, and they arrived today.

Oddly, the bit I was expecting to be a bit of a mission / project was getting Linux installed on them. Disappointingly, or not, it was incredibly easy on the GPD Pocket 2, and not much trickier on the Gemini.

This is going to be a write-up of the process doing it for the Gemini PDA; I will save the GPD Pocket 2 for another day.

And, in case you are wondering how it turns out, I am typing this in vim, on Debian, on the Gemini, and I used the browser and the Wi-Fi to post it. (I cheated with the photos, and used my phone to upload those.)

From single boot to dual boot

The Gemini comes with Android installed by default. I don't know what the Android element is like as, while I have kept it, I have not attempted to use it.

Installing Debian is officially supported as one of the dual (or triple) boot options. To do it, you need a 64 bit Windows or Linux machine, capable of running the official flashing software. There might be other ways of doing it, but I did not look.

I used the GPD Pocket 2, which was running Lubuntu by this stage, as the host for the flashing. I downloaded the firmware base, the "scatter" file, which I think contains the configuration, and the Debian image. All in all, about 3GB of data to download. I went for a roughly equal split between Android and Debian and, in hindsight, I think that was a mistake, as I do not plan on using the Android side.

When the flashing process was over, I used the key combination for the dual boot - Esc key to power on,then holding the silver button on the side until the screen changed. And it booted into Gemian, the customised Debian.

Logging in for the first time 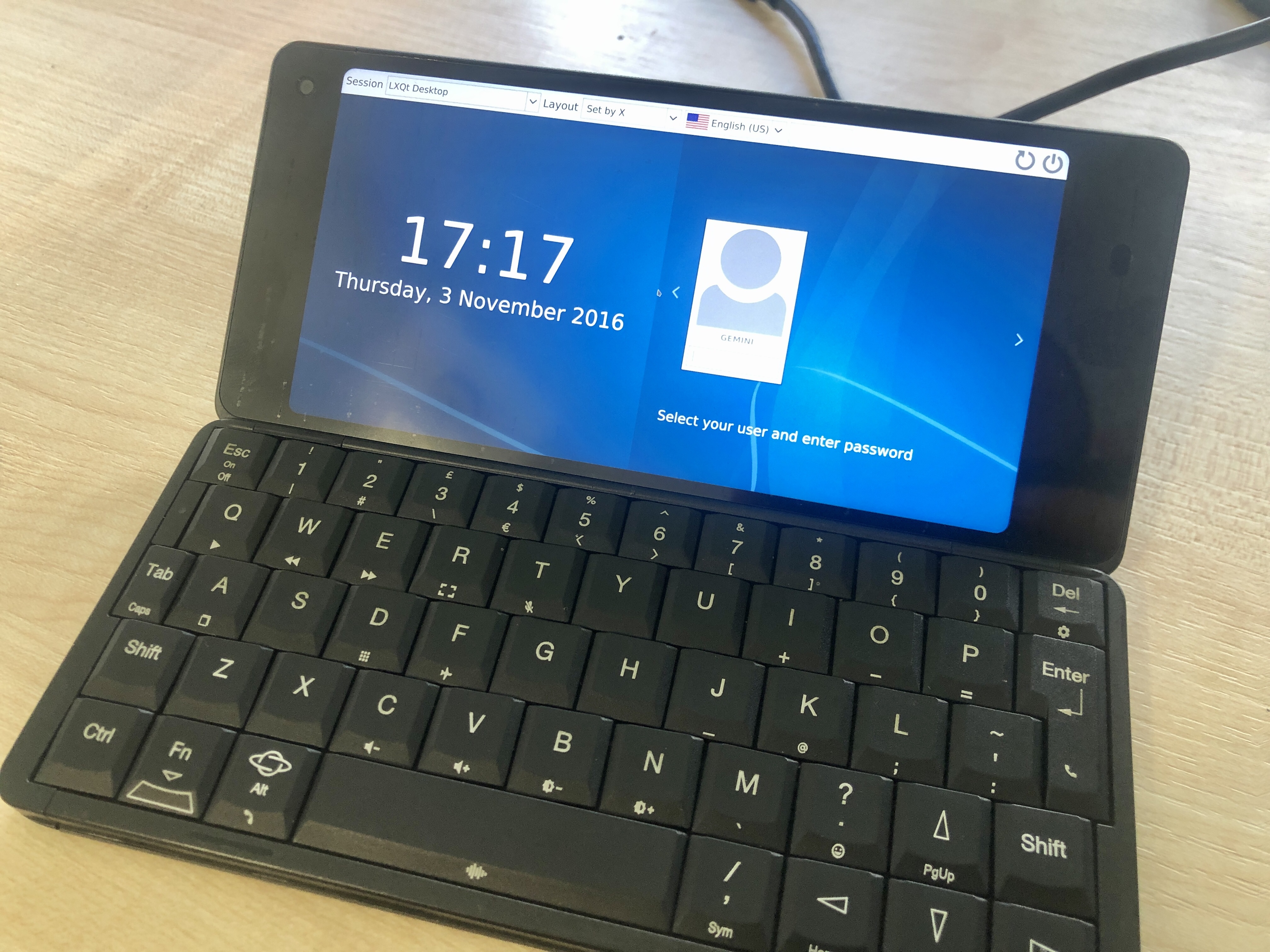 The installation has a user account of 'gemini'. I did not know the password, but it did not take much guesswork: 'gemini'.

What worked "out of the box"

Impressively, almost everything. The Wi-Fi (although it seems to forget the password on shutdown; something for me to investigate). The touchscreen, which is remarkably accurate. Sound, and volume controls. Screen brightness. Basically, everything I have tested.

What tinkering was needed

I don't know when the Debian image was made, but I was expecting a quite hefty 'apt upgrade'. I was not disappointed.

This was not wholly straightforward, as I got caught in dependency hell. It took some manual editing of /var/lib/dpkg/diversions to get libreoffice off the machine, and then things fell into place.

Honestly, not too bad at all.

I did the same hardening I do with almost any Linux installation, but I have yet to tackle LUKS. I have not attempted a LUKS configuration on a running system, so that will be interesting.

A couple of points to note (or for me to remember, if I wipe it and start again): 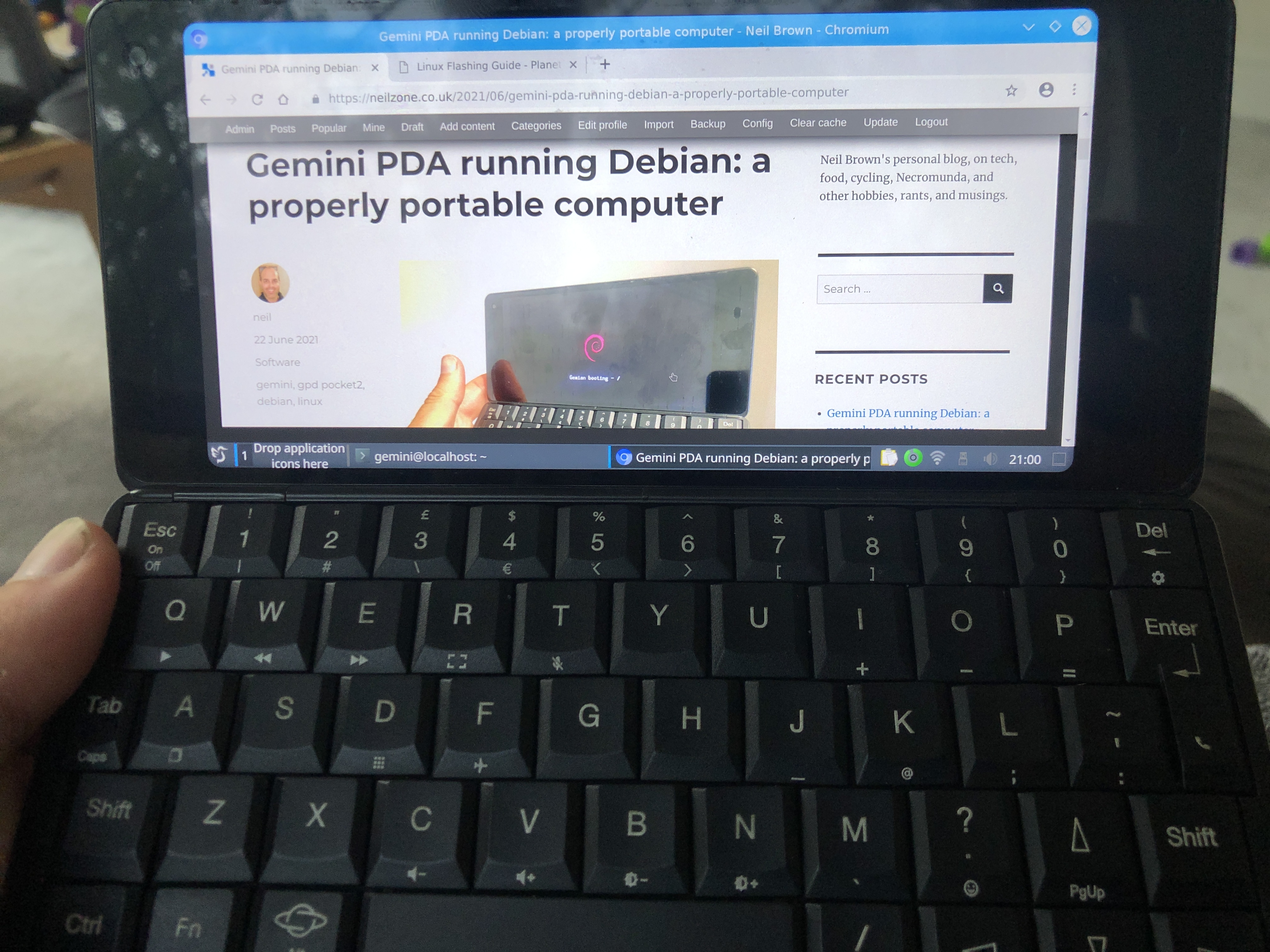 Very positive. It is a small device, and the keyboard is cramped, but what else would you expect?

The keyboard works reasonably well, physically, but you do need to hit the keys centrally. And the layout is, well, something to get used to.

The touchscreen is excellent, and I have already used it more than I expected.

It is too soon for me to have an impression of what it would be like to use for any extended period of time, but writing this on it has not been a chore. Nor has the battery dropped from the 100% mark.

Lots, really, but the main thing is the SIM slot, and whether I can get 4G working within Debian. That would be rather nice.

I have not configured wireguard yet, although I am not expecting any difficulties there.

I could connect to our jitsi instance, but the camera did not initialise, and, while audio ostensibly worked, in practice, it did not.

So it might not end up being much of a project, and just a straightforward installation of Debian to create a useful, very portable, device, which is actually usable!