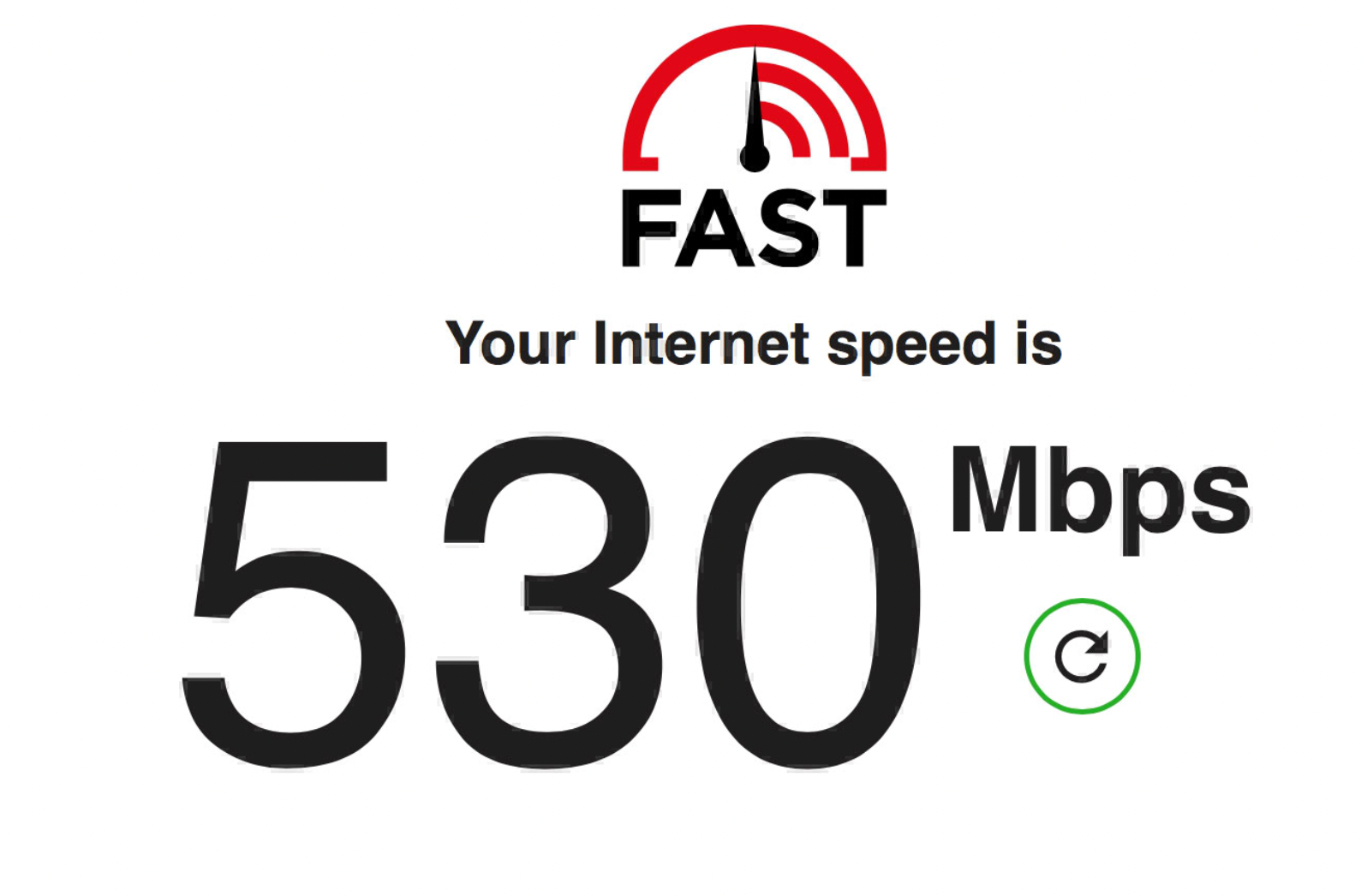 For years, I wanted a faster Internet connection than the one we had.

This was mainly because we work from home, and because we host nearly all of our Internet-facing systems ourselves.

What we had wasn't dreadful — 24/8 VDSL/FTTC — but it was on a long, not terribly reliable, copper line to the cabinet.

We were not in a Virgin Media or alt net area, and the cost of getting fibre installed was not justifiable, so we perserved with VDSL.

When I knew we were moving house, the cost became justified, so I asked Andrews & Arnold to arrange installation of something a dedicated fibre.

It was a bit convoluted, as Openreach needed to get a sub-contractor of a sub-contractor to put a duct from their existing duct in the pavement under our driveway and into the garage before they could run the fibre. But it happened, and didn't take too long, considering we were just leaving the first lockdown.

How fast is fast enough?

Now, we have a reasonably fast Internet connection: a symmetrical 500Mb Etherflow over a 1Gb Etherway. And, in the perhaps not too distant future, A&A is hopefully going to upgrade it to a full 1Gb Etherflow.

I'm excited, because I've wanted a 1Gb connection for ages. I probably need to get out more.

I certainly don't need 1Gb. I don't need 500Mb. With the benefit of hindsight, looking back over the past few months, I reckon 100Mb would be plenty.

The reality is that I don't come anywhere close to stressing what I've got, let alone what I might soon have.

Outside testing — iperf3 or just normal "speed tests" — I don't think I've hit more than about 110Mb down.

Even software updates for macOS devices or my PS4, which I've done over a wired connection, don't exceed that.

There are two of us in the house (although there are quite a few devices connected to the Internet, each doing their own thing), and we share our connection with our neighbour, so perhaps two other users.

I suspect that, on the average day, our peak usage is no more than about 15-20Mb. Streaming from Amazon Prime is about 10Mb. YouTube, about 5Mb.

(Yes, I know, I know, I've bought a vasty over-spec'd connection for our needs. I'm not complaining, just commenting!)

An instance of the excellent Jitsi video-conferencing server

I was surprised that hosting a Jitsi video call with four participants only hit about 18Mb.

I'm hosting Jitsi on a Raspberry Pi 4, as a bit of a test, and it coped with that one conference just fine. I'm impressed with that, frankly, and I'll be interested to see how much I can get it to do, both in terms of participants in a single conference, and number of simultaneous conferences. However, my desire to test the system with lots of people exceeds the number of friends I have...

We host our company's website, and this blog, and pretty much every other site I run, over this connection.

If you load our company's site, it should load very quickly.

That's not really a facet of this connection though — it's because it's predominantly a text-based site, with a couple of images, and videos which do not pre-load.

I used to host it on our FTTC link, and it was fast even though, mainly because I intentionally didn't clog it up with loads of unnecessary Javascript and third party resources.

While I suspect relatively few of my clients — or, perhaps, prospective clients — have very slow connections, I'd prefer to keep our site slim and trim if I can.

When I'm out and about, I route all traffic back through this link using an on-demand VPN, so I can apply my only filtering rules, and avoid other people's filtering rules. I use a mix of WireGuard and IPSec for this, and the limiting factor appears to be the devices themselves.

Now, the bottleneck appears to be either the device (about 65Mb on iOS on WireGuard, and a bit slower on IPSec), or the visited network.

Obviously, I'm not out and about as much as I used to be, so it's hardly a big deal, even though it would be nice for that to be faster.

I don't have much occasion to transfer very large files, but I do often transfer files of a sensitivity too high for email (even with TLS), and I've not succeeded in getting everyone to use PGP. For that, I use the rather excellent zend.to.

Before, a file of, say, 500MB would have been a slightly painful experience for the recipient, as they'd be limited ot downloading it as fast as my FTTC's upload would allow. It wasn't terrible, even at 8Mb, and, frankly, once you've started the download, it just runs until it is finished.

Now, it's much faster, and so offers a better experience to clients, and I like that. Typically, their end is going to be the limiting factor.

It's not just about speed

While speed is good, it's not just about the speed, and there are a number of reasons why I like having the connection I've got.

I value the increased resiliency over FTTC — or, at least, over the FTTC line which I used to have which, despite A&A's best Openreach-chasing efforts, would lose sync a couple of times a day.

We haven't had a single blip — that I've noticed, at least — since we've had fibre.

(And I'm sure that the A&A support team will be pleased with this, even if they are far too polite to say anything, as they must have been fed up to the back teeth of chasing Openreach to turn our previous FTTC connection into something more usable.)

Low latency is also good, since we host our own telephony server / PBX (and I spend a lot of time on the phone), or on video conferences.

I don't play online games, but I suspect it would be useful there too.

Although I hope never to need it, the SLA for dealing with a fibre break is pretty impressive (if BT lives up to it). And that's on top of the outstanding support from A&A.

So why do I still want a 1Gb connection?

I've no idea. I certainly don't need it.

But I'm certainly not going to turn it down.