Elegoo had a discount via Amazon on its Mars 2 resin printer last week and having been tempted for a while, I took the plunge.

Considering I'm just printing bits for Necromunda, and not saving the world, it's not cheap, but, so far, it has been fun, and that’s definitely worth something.

My first impression of the machine wasn't great as, on the third print, the LED component failed. So I sent it back to Amazon, and got a replacement. So far, this one hasn't broken.

But, that aside, I've been impressed with the machine. It's easy to set up, quiet in operation, and it seems simple enough to maintain.

You can get different types of resin, and the first bottle I've tried is water-washable resin.

So, for the sake of an extra £6 or so per litre, the water-washable resin seemed like a good idea.

It's far from cheap, at about £44 per litre, but it seems to go a reasonably long way. Of course, this depends on what you are printing and, so far, I've stuck to relatively small objects — the biggest so far has been the base for a sentry cannon. But it's certainly convenient to get the model off the base and under a tap, rather than have to faff around with lights and alcohol. 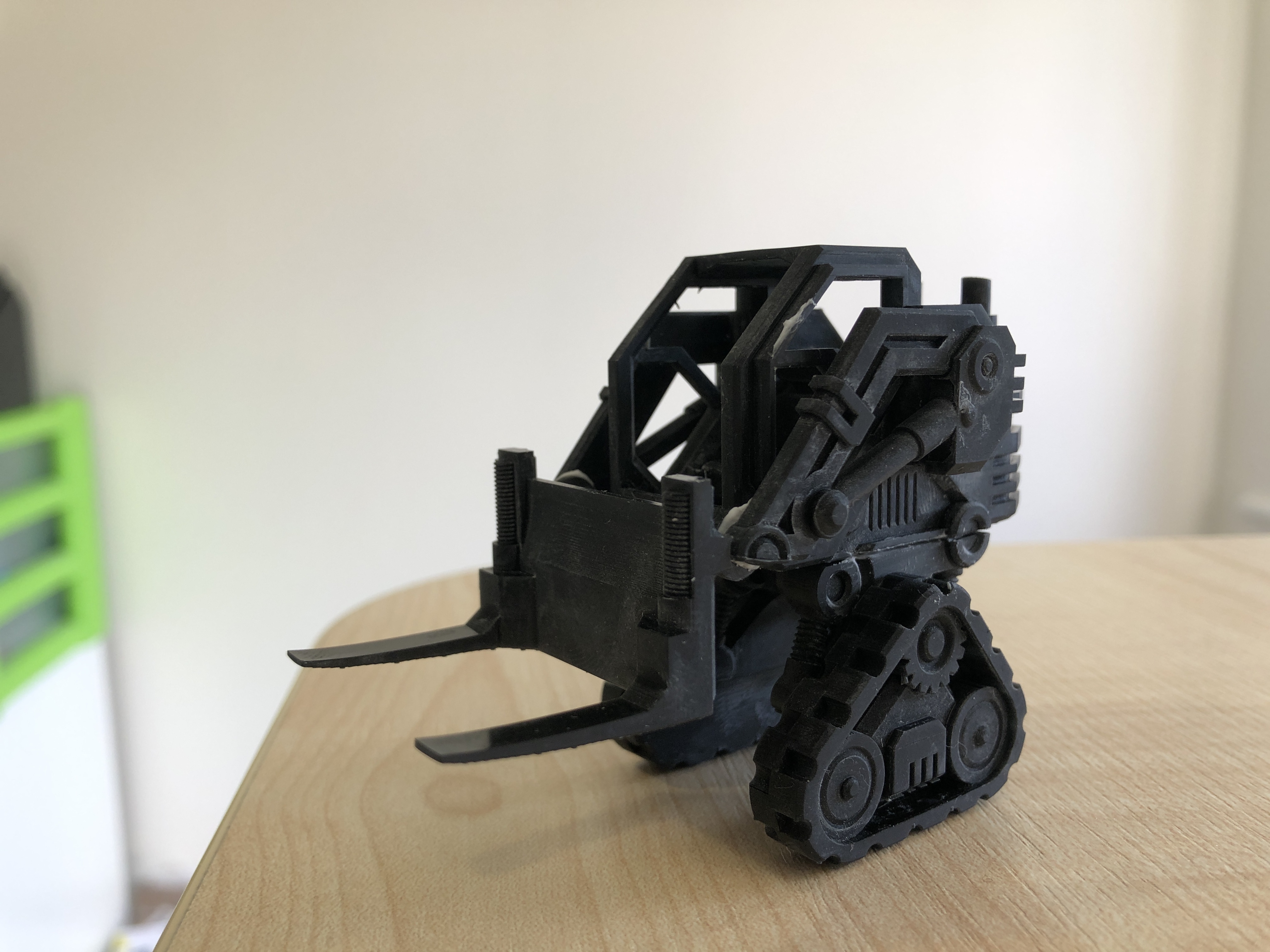 As in, so, so much better than I was expecting. It's just a same that I don't have a camera which can capture the nuance of this. The level of detail on a 28mm figure is astounding — if I were Games Workshop, I'd either be worried about these machines, or else looking to license .stl files to let people print their own authorised models at home. 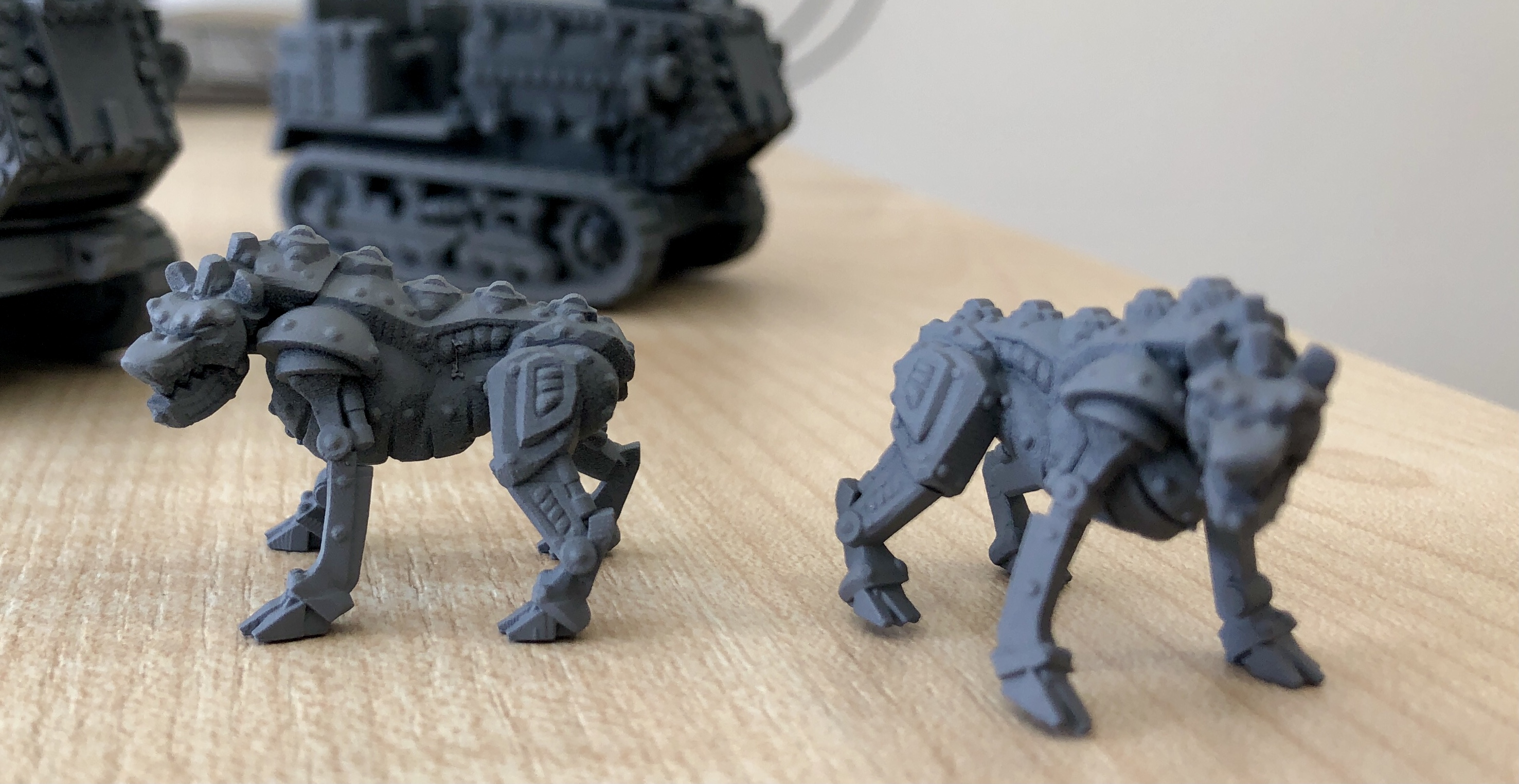 Obviously, the detail in a print is only as good as the detail in the .stl file, but, so far, experimenting with various .stls from Thingiverse and from Patreon, I've been impressed. Because the quality is high, it means you can print really small details, and small supports.

Separating prints from their supports has been easy on the whole — where I've had problems (and I've snapped a cyberhound's leg, and knocked the umbrella off an assasin's model), I've put it down to simply not taking enough care.

Print time is based on layers: the more layers, the longer the print takes.

It does not matter how many things you are trying to print from a time-to-print perspective (obviously, it uses more resin): a 1cm cube will print in the same time as 20x10x1cm box, as the number of layers to create a 1cm high model is the same.

The trick, it seems, is to think carefully about the orientation of the models, to minimise layers. Laying things horizontally makes for faster prints.

The water washable resin's bottle suggests a layer exposure time of 8 seconds, as opposed to the 3 seconds for normal resin, so it is quite a lot slower. But, for my needs, that's fine. (It also suggests a longer initial exposure, for the base. The one time I didn't do this, as a test, the model fell off mid-way through printing, ruining the whole thing.)

I've been using the ChituBox software, and that gives an indication of both the volume of resin used (and the price, which is nice), and the time to print.

The print bed size is okay

I can't complain, as the print size is obvious from the specs of the machine. But the print bed size is pretty small. It's fine for my needs — some figures, and smaller terrain pieces — and larger models are often broken down into individually-printable parts, even if takes me many prints to get the bits together.

The machine comes with a USB stick, which presumably has some software on it, and some test models. I don't know, as I'm not going to plug a random USB stick into my computer.

Instead, I downloaded the recommended software — ChitboBox – and installed that (which also means I'm sure to have the latest version).

I've previously used Cura with an FDM printer, and so I wondered what ChituBox would be like.

I've been impressed. It's simple to use, and, in particular, it's easy to adjust size and scale of models (individually or in groups) and to automatically add supports. I've not had one bad print yet with the auto-supports.

So far, I've limited myself to printing other people's models — either free models from Thingiverse, or from Patreon subscriptions — and, other than mirroring them, so that I can have slight visual differences, I've not tried to edit anything. I don't think ChituBox is the program for that, as far as I can tell.